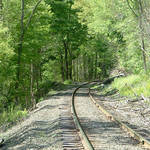 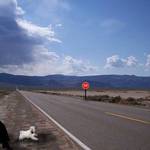 The original picture was somewhat boring. There are no clouds in the sky and nothing really to draw somebody's attention. However, I'm fasinated by the texture in those rocky cliffs, so I decided to try and put an emphasis on this. After a lot of tweaking, I ended up with this shot, which I believe does the trick. I first colorized the picture as sepia, but decided against that. The cloudless sky seemed wrong, so I added blue until I was happy, which ended up being this purple. Colorizing in photoshop can leave areas with similar color tones pixelated. I was happy with the rocks, but the sky looked horrible. To fix this, I used the magic wand tool and selected the sky. I had to tweak the selection because it didn't grab all of the sky and had part of the upper tree. Once the sky was selected, I used PhotoShop's smart blur filter and set it to 15 pixels. This smoothed out the sky very nicely. The picture still felt muddy at this point, so I deselcted the sky and opened up the levels. I brought the lights and darks in a lot which effectively adds contrast and cleans up that 'muddy' feeling. After this, I tried a few other things such as an unsharp mask, but ended up reverting back to this version. Everything else just seemed too much. Was all of that worth it? Do you think I was able to capture the textures of the rocks and make an interesting picture? Please comment below.

Guest - Jul 20, 2004 03:56 PM EDT
I commented on your first comment before I saw the 2nd one. I agree with you, I think keeping the trees green would probably do really well for this picture.

Guest - Jul 20, 2004 03:54 PM EDT
That would probably help the picture to leave the rocks the original color. Feel free to print it out. If you want more details of what I did, please let me know.

Guest - Jul 20, 2004 03:34 PM EDT
... or maybe only a very soft colouring back into the rock.... or maybe leave sky and rock as they are and return the trees to a very subtle colouring. It's the warmth you need. The photo is not 'dark' enough to create a lovely sinister feel (sprinkles of moonlight might do this), and not 'light' enough to give it quite enough life. It's very close though :)

Guest - Jul 20, 2004 03:29 PM EDT
Thanks for the tutorial - may I print it out and play around with your method? I like the finished version :) If it were up to me I would like to experiment further... return the original colour to the rock face to bring warmth back into the scene and contrast against the purple sky, and dark purple trees at the bottom. What do you think?