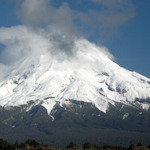 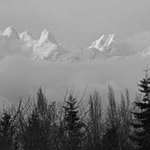 took this picture of edinbrough's princess streets (Scotland's version of oxford street) i then just changed it to sepia to give it that old look . thanks for looking
just foe sgbrown
The Scott Monument is a victorian gothic monument to Scottish author Sir Walter Scott. It stands in Princes Street Gardens in Edinburgh, opposite the Jenners department store on Princes Street and near to Waverley Station. The tower is 200.5 feet or 61.1 metres tall, and the small viewing deck near the top — which gives a panoramic view of central Edinburgh and its surroundings — is reached by a narrow spiral staircase with 287 steps. It is built from Binnie shale quarried in nearby Livingston; the oil which continues to leech from its matrix has helped to glue the notoriously filthy atmosphere of victorian Edinburgh (then nicknamed "Auld Reekie" — old smokey) to the tower, leaving it an unintended sooty-black colour. It is often noted for looking like a 'gothic missile'.

Following Scott's death in 1832, a competition was held to design a monument to him. An unlikely entrant went under the pseudonym "John Morvo", the name of the medieval architect of Melrose Abbey. Morvo was in fact George Meikle Kemp, forty-five year old joiner, draftsman, and self-taught architect. Kemp had feared his lack of architectural qualifications and reputation would disqualify him, but his design (which was similar to an unsuccessful one he had earlier submitted for the design of Glasgow Cathedral) was popular with the competition's judges, and in 1838 Kemp was awarded the contract to construct the monument.

John Steell was commissioned to design a monumental statue of Scott to rest in the space between the tower's four columns. Steell's statue, made from white Carrara marble, shows Scott seated, resting from writing one of his works with a quill pen.

Following an Act of Parliament (Monument to Sir Walter Scott Act 1841 (4 & 5 Vict.) C A P. XV.) permitting it, construction began in 1841 and ran for nearly four years. The tower was completed in the autumn of 1844, with Kemp's son placing the finial in August of the year. When the monument was inaugurated on the 15th of August, George Meikle Kemp himself was absent; walking home from the site on the foggy evening of the 6th of March that year, Kemp had fallen into the Union Canal and drowned.
The Scott Monument from below
The Scott Monument from below

In the 1990s, the monument was closed periodically for restoration work; in the early 1990s it was covered in scaffolding for several years, and it was also closed for additional work in 1998.

The monument is now administered by the museums department of Edinburgh City Council, although the cost of restoration led to discussions in 1996 about selling the landmark to private interests.[1]

Guest - Apr 04, 2007 02:52 PM EDT
The sepia was a good move here, Mike. It helps minimize the newer buildings and keep the focus on the elaborate memorial. The history was a great read. I remember leaving for school on foggy London mornings and not being able to see the far side of the stoop. It was eerie - it's easy to understand how someone could fall into the water and drown in such conditions. Vicki

Guest - Feb 11, 2007 03:41 PM EDT
thanks for the comments everyone ,steve this was taken from the observatory just down from the castle before this we did the famous mary's kings close (most haunted did a show from there) as i enjoy the paranormal this was an ideal place i will however try and give a history lesson with my photos lol

Guest - Feb 11, 2007 02:17 PM EDT
Thanks for the personal history seminar Mike - absorbing stuff as ever! Looks like a couple of bits of the castle and St Giles in the foreground, so I take it you snapped this from the Royal Mile somewhere?

Guest - Feb 11, 2007 01:01 PM EDT
Great photo of this historical monument. Wonderful architecture. I like the shades of sepia...and the history lesson. :)

Guest - Feb 11, 2007 07:46 AM EDT
Wonderful photo Mike, the sepia sure makes it look extra old. I could not help myself and read the just for Steve info lol.. Thanks for all the information, I enjoyed reading about and seeing the Scott Monument.