Wind Beneath His Wings 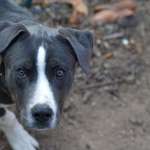 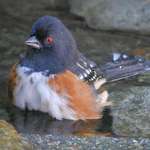 This is a captive American Kestrel (aka sparrow hawk), on display at a local country fair by a wildlife rehabilitator. It apparently had been raised by a human, then released in the wild, where it was unable to cope and was "rescued" by a well-intentioned person and given to the rehabilitator.

There was a pretty good breeze blowing at the fair, and it was a bit sad to see the kestrel spreading its wings into the wind and going through flying motions, apparently wishing and imagining it was free.