Strange Sights in the City 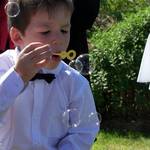 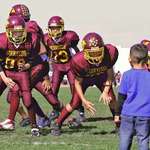 these cyclists were dressed in strange clothes for cycling, and the males were riding unusual "bicycles", - we'd seen them earlier and tried to catch up with them so that I could get a shot of them from the moving vehicle window, but we couldn't get closer in the traffic. It gave us some smiles to see them. We realized shortly after, that they were probably enroute to join the "demonstration" or gathering of cyclists a short distance from where this was captured :)