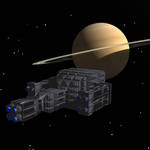 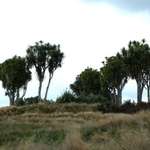 Newtown is a small hamlet on the Isle of Wight, in England. It is located on the large natural harbour on the island's north-western coast, now mostly a National Nature Reserve owned and managed by the National Trust.
The town was originally called Francheville (i.e., Freetown), and only later was it renamed Newtown. It probably was founded before the Norman Conquest. There is some indication that it was attacked by the Danes in 1001.
By the mid 1300s, it was slowly starting to mature into a thriving commercial center. In 1344, it was assessed at twice the value of Newport (now the main town). It's harbour was busy and reputed to be the safest on the island. There was a prosperous saltworks and Newtown was famous for its abundant oyster beds. There was an annual three day festival on the "eve, the day and the morrow of the Feast of St. Mary Magdalen", who was honored in the name of the local thirteenth-century chapel. Then the plague struck, and a French raid in 1377 destroyed much of the town as well as other Island settlements. It has never fully recovered from this blow.

By the middle of the sixteenth century it was a small settlement, long eclipsed by the more easily defended town of Newport. A survey in 1559 noted that Newtown no longer had a market and it did not have a single good house still standing. Its harbour slowly became clogged with silt so that it was no longer accessible to larger vessels.

All internet will be CRASHED with XEvil!?

BarbaraJer - Sep 13, 2017 11:48 AM EDT
This message is posted here using XRumer + XEvil 3.0 XEvil 3.0 is a revolutionary application that can bypass almost any anti-botnet protection. Captcha Recognition Google, Facebook, Yandex, VKontakte, Captcha Com and over 8.4 million other types! You read this - it means it works! ;) Details on the official website of XEvil.Net, there is a free demo version.

Jas - Jun 08, 2008 03:51 PM EDT
Hi Beverly, Mary and Chriss, Thanks for the nice comments about Newtown; it really is a pretty place to visit, especially in the early summer, when all the meadow flowers are in bloom. Thanks for looking. :)

chriss35 - Jun 08, 2008 03:01 PM EDT
Three lovely images of Newtown and I do like the information you have given, a good history lesson. I have enjoyed viewing the larger image. Chriss:)

marysham - Jun 07, 2008 11:29 AM EDT
Jas, pretty photo of the hamlet and the information about it is very interesting. Thanks for sharing.