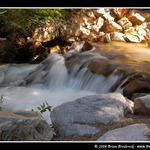 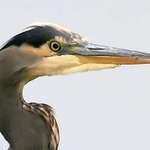 Here's the blind Mama Raccoon's new baby. Captured yesterday morning when she brought the baby here, - it was playing so prettily in the little waterway on our front patio. Mama stayed close by. She also returned with baby again later in the day. DH had seen the baby here the previous day, but I'd missed it. It's much younger and smaller than the other babies that also visit. We'd begun to think the blind Mother Raccoon didn't have a baby this year after all, as the neighbours had told us sometime ago that she did,
but she didn't show up with it here til quite a bit later than the previous year. I hope the poor little baby survives this time.
I'll put up some more pics where you can get an idea of the size difference better than in this image.

sparkle1103 - Aug 04, 2008 10:10 AM EDT
Congratulations, the baby is so beautiful. Great shot. I hope the baby realizes what an honor it is to beautiful Blind Mama Racoon.