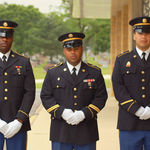 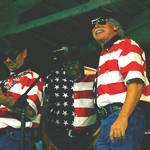 We don't take many of these. Not because we have a problem with them but typically a photographer goes on base to do a group of marines, soldiers, sailors or airmen all at once. Usually at basic training. We have a big air base nearby and we occasionally take photos for the Air Force people.

A woman called the studio to ask if we could take a picture of her son in his uniform. She apologised for the short notice but he came home unexpectedly and would only be here this weekend. I said ok and we squeezed them in at lunch time. The Marine, Paul, was going overseas and wanted to give his mother a photo for Christmas. He seemed very young and she was obviously very proud oh him. This photo was the one he picked for her from a series. The flag background was added from a stock file photo. After I printed the photos, I transferred the set to a photo CD and gave it to her with the 8x10's. She asked how much she owed me and I told her we don't charge the marines for photos. She hugged me, cried and hugged her son, I went to the back room and took my time refilling my coffee cup, when I returned they were gone.

Guest - Jun 17, 2006 05:44 PM EDT
Thank you all for your kind comments. The young Marine was leaving for Iraq and it didn't seem right to charge them for the photos, which only cost me a little time. The least we can do for our troops.

Guest - Jun 13, 2006 02:10 AM EDT
A beautiful portrait as is your usual. That was very kind of you to donate all your hard work to this family. A wonderful gift from the heart and one that is sure to be remembered. (Ahhh..... you big softie)

Guest - Jun 12, 2006 04:35 PM EDT
What a wonderful portrait. I would have never known that he wasn't standing in front of a flag if you hadn't mentioned adding the background. You did a great job, I just hope someday I can learn do do that also.