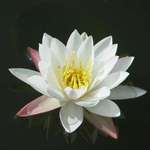 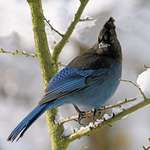 This is a rare shot of a Merlin hawk.This bird of prey appeared on our deck on Sunday,and allowed my husband to observe him.This in itself is extremly unusual.It then flew into a very large rhodo near the back of the house.
I had just come home after seeing my father for the last time.He was in hospital since the 19th of Dec.He never bounced back from a routine hernia operation.
I was able to observe this small bird of prey long enough to get some images.My husband and I feel very strongly that this was my father coming to say his last goodbye.
Now the story gets even better...Tuesday morning,I see if the Merlin is still in the rhodo,and I find him face down in the dirt.A friend of ours works at a wild life rescue,and we ask if any one would be interested in looking at the bird.She says that her husband will come by and pick up the hawk.He shows up on a brand new motorcycle,and we stand in the driveway and admire his new bike.I will intergect something here...My father was a motorcycle courier during the second world war.
He leaves with the bird in the saddle bags of the bike.My father's last ride...
The people at the wild life rescue said the only thing wrong with the Merlin hawk was that it starved to death.My father quite eating in the hospital.
My father who was a photographer his whole life,passed at 9:30 Tuesday evening.He is now flying free.

anne - Aug 08, 2008 04:18 PM EDT
An amazing picture!! What a wonderful experience for you, Golda. I was immediately covered with chill bumps. The letting you know. I believe, from experience, that they do come back and visit us when they can. The power of LOVE works miracles.

Guest - Apr 11, 2007 02:05 AM EDT
I sincerely believe that was a last goodbye... they say the departed take three days to visit their loved ones before they truly leave us, and your beautiful photo captures that most meaningful moment when your Dad came to espress his enduring love for you. God bless, anne

Guest - Mar 16, 2007 03:48 PM EDT
I am sorry about the loss of your father, I think the story was very interesting, I also believe, and had odd things happen when my dad died and still do from time to time, the latest in a shot of a grandaughter, My husband spotted it, It lets us remember and smile about him,

Guest - Mar 16, 2007 12:25 PM EDT
This is indeed a touching and poignant story. Whatever the literal truth or otherwise it is deeply symbolic, and its importance for you is what counts. Please accept my condolences on your painful loss.

Guest - Mar 15, 2007 11:36 PM EDT
Golda, I'm so sorry to hear about the loss of your Father. Your story is very spiritual. I love it. I sent you an email from LF to let you know that I worked on the above photo and got more details. Let me know if you want me to post it.

Guest - Mar 15, 2007 05:25 PM EDT
Hi Golda, I'm so very sorry to hear about your loss. I love the story, and believe it was your fathers spirit 100%. It gives me goosebumps, this sort of thing happens a lot and I am a believer. Thanks for sharing. I've never seen a Merlin Hawk, let alone a spirit one. Don