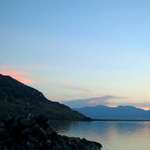 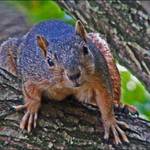 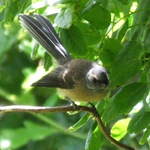 Peregrine Falcon "Nelson" - this male peregrine falcon was injured, - blinded in one eye and injured his wing at the same time, so he cannot be released to the wild. He was found in a chicken coop near the rescue facility! and he had injury to his left eye which they believe was caused by wire netting, when he dived into the chicken coop. Now a cataract has formed over the injured eye. They think maybe he had something wrong with that L eye in the first place.
Peregrine Falcons are the fastest flying of all the birds, reaching 200 mph, apparently. Have always wanted to see one, so today was very happy to have this opportunity.

Guest - Apr 30, 2007 04:08 PM EDT
thanks very much, Mike, for the interesting info, - will share it with DH, as he was amazed when told the speeds these falcons reach. Have always hoped to see one, so was really pleased yesterday to see Nell :) thanks for the nice comments also.

Guest - Apr 30, 2007 03:16 PM EDT
The air pressure from the Peregrine's bullet-like attack plunge might burst an ordinary bird’s lungs. It’s thought that the series of baffles in a Peregrine’s nostrils slow the wind velocity, enabling the bird to breathe while diving . This feature of the Perigrine's nostrils, once its use was found, was mimicked in fighter jets. ahhh another bird photo just love em keep em comin