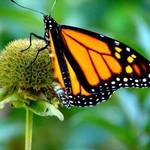 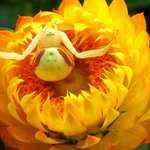 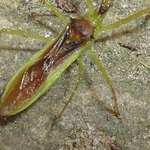 Further to my caterpillar pics, I thought I'd tell the rest of the story. It's Monarch butterfly season here in summer (Dec - March) & when they're hungry, those caterpillars will strip the plant bare then start on the branches! So, any caterpillars that have turned into a chrysalis on a leaf that's being devoured by a starving sibling, I save them and tape them to a "maternity ward" branch that I have inside. These guys were some of the 19 chrysalis's that I had inside (8 had hatched, 5 more would hatch later that day). As well as the newly hatched butterflies, you can see the green chrysalis's that have a ways to go, and the black one in the foreground that hatched soon after. Two of the butterflies were boys (the middle one I think was a girl from memory lol).