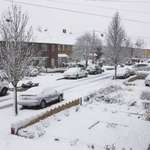 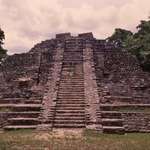 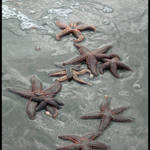 It was a dark and stormy night. I was sitting at my computer programming new features for The Lens Flare when a loud rumble shook the house, and like a madman, I made a run for it. Of course, I didn't run for shelter like a normal person might. I ran for my camera and tripod like a gibbering lunatic. My brain swirled with the techniques that I'd read in the TLF forums, and I was determined to try them out.

The first set of clouds produced amazing lightning then quickly passed. Slamming my memory card into the computer, I quickly realized that every one of them was a dud. I though the focus ring was set to infinity, but it was turned completely the opposite way. Every picture was extremely blurry, but I was still somewhat happy because I'd managed to get 3-4 lightning bolts in the shot.

About 30 minutes later, another thundercloud rolled in and I was ready. I shot the cloud as it approached the back of the house, then switched to the front yard as it passed over. A few of the bolts were so close, powerful, and bright that it completely washed out the shot. But I was able to get a handful of well exposed bolts of lightning.

For those that would like to try to shoot lightning, first make sure you are in a safe place. I'd hate to hear about a photog-b-que on the news.

Once you're safe, use a tripod and shoot long exposure shots anywhere from 2-30 seconds (or longer if your camera lets you). If the bolts are too bright, consider using an ND filter. Use the manual focus and set it to infinity (it's a good idea to figure out how to do this before you're in the middle of the storm). Play with the aperture settings to meet your situation. You may find that a wide open aperture is best, but that might over expose your shot if they're blasting close by. Use your shortest focal length so that you're covering more sky, and don't be afraid to continually have a picture in the works. I took about 130 pictures and ended up with about 5 good ones, a few over exposed ones, a few really small sparks, and a whole lot of duds.

Also, I'd like to thank Alan (Bubbalinn) for the tips that he gave me on the TLF message board.

I used a 15 second shutter speed.

Quitelady - Mar 27, 2012 04:20 AM EDT
I used a 15 second shutter speed and a tiny aperture, so that is 15 seconds of light (including lightning, hence the bright clouds). The bug wire is visible on the clouds though, I need to blur that out.

carlosvandangos2009 - Apr 23, 2010 05:37 AM EDT
Hi Azkul my freind i would just like to say wow great shot it is my dream to be able to take some great shots of lightning as great as this shot but unfortunatly i live in england U.K. and we dont really get great lightning storms very often over here but fingers crossed for this summer that i might get the chance to capture a shot as it was the mane reasen why i bought my camara in the first place! and thank you for the advise! keep up the great work! and wish me luck lol!

Pinetree3 - Nov 03, 2009 02:32 AM EDT
This one turned out well. Sure caught my attention. Thanks for the tips. Here in Northern California, maybe once a year a lightning storm will pass by. I sure envy you photogs in areas with more lightning photo opportunities.

Matt - Apr 03, 2009 02:12 AM EDT
Great Shot, I to love lightening. Many years ago I lived in the country and in a valley, The storm reached from one side of the valley to the other. The lightning went on for over an hour and I have never seen a storm match since it but with that grew my love for lightning and have a few shots of my own here as well. Thank you for the tips, my camera is a wanna be DSLR but will try your settings to see if I get better results. Take care and keep under cover and NOT that of a tree !

Jas - Mar 17, 2008 11:46 AM EDT
Have just seen this wonderful lightning shot! I'm still getting to know my camera but one day I'll hope to make a capture like this one. It almost makes me wish there was a storm on the way. :)

Guest - Aug 15, 2006 08:14 PM EDT
Thanks. Since I was in my front yard, the foreground was pretty mundane so I aimed directly at the clouds rather than trying to capture much of the foreground. Under the circumstances, I think the composition is ok, though it would have been nice to be near a lake or something. The image came out brownish-red out of the camera. The blue was achieved by altering the hues in Photoshop.

Guest - Aug 14, 2006 01:49 AM EDT
Great capture of the crack of lightning and the swaying trees add to this stormy night image. Regards Vince.

Guest - Aug 13, 2006 01:47 PM EDT
Hey great job Brian!! I like the nice blue sky and the lightning bolt is nice and crisp. I got a giggle when you said you had the focus on two feet instead of infinity :) I did the same thing a year or so ago LOL.. It is a good idea to learn all the buttons and adjustments of your camera by heart, using a camera in the dark is a new world. A little flashlight helps a lot until you can run your camera blindfolded ;) I did not think about the brightness of close lightning, mine are always around the same distance 10 or so miles. You did great in playing with the settings, every storm the lightning can be different. It's handy to save your settings on a piece of paper from the good exposures and keep it in your camera bag for your next lightning shoot. OK.. Now that you have beat Mother Nature, next is using a really long shutter speed where you can maybe luck out and get two or three lightning bolts in one shot LOL.. I'm really glad my tips helped you with your shots. I'm going to post some more tips in the forum in the lightning thread as soon as I can.