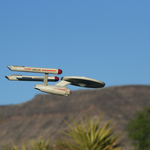 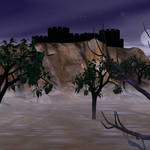 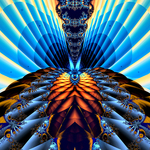 This is a tribute to all of the legends that we've forgotten or that perhaps sit in the unused rooms of our minds. They are just waiting for us to enter their rooms to dust them off and share them with another generation.

This depiction of Excalibur sitting lonely in a dark, misty room wishing to be outside in the light has been an image that I've wanted to complete for a long time. I created a prototype of it a few years ago, but I was never fully satisfied. In the earlier version, I used cylinders instead of a rock, the sword object was borrowed from somebody else, and since it was one complete object, I only knew how to wrap the same texture around the whole thing.

This image is completely mine. The sword was created in Wings, and is the same object I used in my Excalibur image where the Lady of the Lake is holding it above the water.

I split up the sword into logical units so that I could use different materials on each part of the sword. I modeled it after a claymore or Scottish greatsword, which gets its name from the Gaelic word claidheamohmor. I used a coarse rocky texture for the haft, a marble texture for the guard and pommel, and a silver material for the blade.

The lighting was crucial for the drama I was trying to convey. If you look closely, you'll be able to see the slight shadow the sword is creating in the infinite streams of light along with the wooden cross section in the window.

I hope you enjoyed taking a look. It's an image that has been rolling around in the back rooms of my mind for many years, and I'm glad to be able to share it with you.

Guest - Oct 06, 2007 06:05 PM EDT
Thanks, Ikka. In fact, I have written many short stories revolving around a fantasy setting that I created on another website: www.desertrealm.com - the forum area contains the setting. I haven't been there for a while, but people still post short, interactive stories there.

Guest - Oct 06, 2007 04:36 AM EDT
Akzul: Great work and thank you of the story, the explaining of working. But you can write a own story, an actual maybe a short story with this image. We all have forgotten legends at our mind. Things we gave back, we want think about. I could be a psychical story of person.

Guest - Oct 25, 2006 04:24 PM EDT
I can totally relate to your work for this picture. I have read the legends for 70 years now. I began reading at 5 and stories of King Arthur were in our Literature books. When I saw the Sword the Lady of the Lake had brought out of the water, I wondered if a Knight would be along soon. To find Excalibur - alone and waiting brings chill bumps to my arms. Has a Knight found its resting-hiding place, at last!!!! A Wonderful picture.

Guest - Jul 09, 2006 08:27 PM EDT
Brilliant. A true work of fine art with a beautiful message that light and hope remain even in the darkest rooms of our minds. Thanks for sharing it with me.

Guest - Jul 09, 2006 02:52 AM EDT
Stunning! you've done a fabulous job of this. It was neat reading about how you've been working on this "in your mind" for so long. am happy for you that you've accomplished this, and happy you've shared it with us. The light rays are wonderful and so is Excalibur's blade. Are you going to make a print of it for your wall??