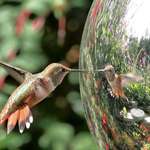 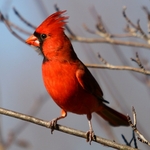 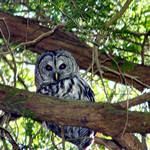 A California Brown Pelican in flight off Alameda, California. These birds generally travel in small groups of between 4-10, though they may gather in larger colonies. I usually see them in flight near sunset. I took this shot by waiting in an area near their ususal evening flight path.

A few mornings after I took this photo, I got up before sunrise and went down to the San Francisco Bay near the Alameda Naval Air station. I saw several hundred of these birds massed together in this cove area. For about an hour, the pelicans would peel off in small groups, each following the same flight path further down the bay. Unfortunately, due to the position of the sun and the fact that I only had a telephoto lens so there was no way I could capture the entire group in the cove.

These are among the heaviest flying birds, weighing about 9 pounds with a wingspan of 6 feet. According to U.S. Fish and Wildlife, the California Brown Pelican is an endangered species. It was nice to know that there is still such a large gathering of these birds in the San Francisco Bay area.

Pinetree3 - Jan 29, 2008 03:40 AM EDT
It helps that these birds in this area fly west near sunset. They fly into the setting sun and generally follow along the shoreline at a low altitude. If you are in the right position at the right time, you can get a super shot of this species in flight. If I were anticipating a fly-by I would have my polarizing filter in place, my ISO dialed up at 400 or above, set my shutter to a "burst mode" of at least 1/125th sec. (or simply use the Sports mode on my camera).