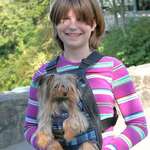 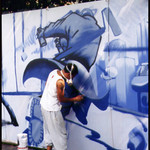 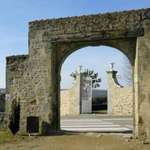 Cabrini High School is named after Mother Cabrini or St. Francis Cabrini, the first saint to be identified in the United States. The facility of the school extends to Esplanade Avenue directly behind Moss Street. The facility on Esplanade was an orphanage at one time. Mother Cabrini came to New Orleans in 1895 and helped the orphans in the French Quarter. Her religious sisters and she, with the assistance of Captain Pizzati, moved to Esplanade Avenue in 1910. Here they ran the orphanage and helped educate the Italians who were moving into the area. The school was started in 1959 and is an all girls’ Catholic School. The two-story complex on Moss Street was completed in 1965.

Guest - Jan 24, 2005 04:00 PM EDT
Where was this picture taken? I do not recall the inscription. I guess when I am there I am too worried about my daughter's education then the beauty of the buildings. Some of us are too busy to "stop and smell the flowers" and enjoy the beauty and history of this lovely city we call home.

Guest - Jan 21, 2005 02:42 AM EDT
A beautiful picture. I like the color hues and how you were able to get the inscription to come out so clearly. A lot of history at this site. Thank you for the narration.