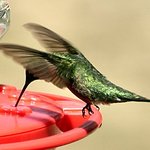 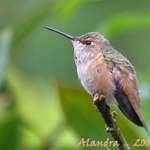 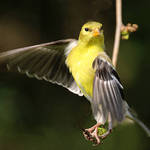 I caught this Quail running from me in a small wash out in the desert. I think they are cool looking but strange with them wanting to run instead of flying. If I were a bird I would fly.. Anyway if your wondering why they run there wings are adapted for explosive, short flights. They also forage under shrubs, and such a habitat is often very dense. So running through that habitat, or running from open spaces to hide under shrubs seems an advantage, rather than first flying and potentially hitting branches. That cool thing on there head is called a plume or top-knot. The topknot looks like a single feather, but it is actually a cluster of six overlapping plumes. The black plume on male quails has a forward arch that bobs up and down when it walks, while the female quail's plume is much shorter.

bubbalinn - Jan 10, 2010 09:52 PM EDT
Hi Ann and Claudia, Thanks for dropping by and for your nice comments.. Quail sure are interesting. They all hang around together, if you see one there is always at least 15 more close by.

bubbalinn - Jan 10, 2010 10:25 AM EDT
Hi Carol, Beverly, and Don :) I'm glad you all enjoyed my photo and information. They are speedy and can disappear in a flash, I've lucked out just a few times in years getting some photos of them. I'm hoping someday to get a shot of mom and dad with all of the babies running along behind them. There so cute they all stay in line with there little feet a blur..

donwrob - Jan 10, 2010 08:28 AM EDT
Very cool Alan! I saw a few of them when in AZ last spring, but was unable to get a clean shot. They are fast little guys that usually stay well hidden. Great job catching this beauty! Don