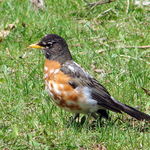 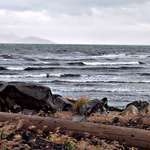 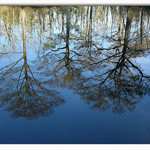 Maori legend tell of a great migration, in a large sea going Waka, which brought my/our ancestors from there home in Hawaiki to New Zealand, The same Legend tell of an ill fated green stone gathering trip of the Waka of the Araiteuru people which was wrecked near by.
While the remains of the Waka became a reef the kumara became rocks and the round food baskets or Te kahinaki were washed ashore and formed the almost perfrctly spherical boulders scattered along 50 metres of beach.

lorraine - Aug 25, 2008 04:43 PM EDT
Thanks Jas, yes the light house is further south out on a point of land, it was well worth the visit, just a shame that we didn't check the tide times,you are right, they do look like Alien eggs,

Jas - Aug 25, 2008 01:22 PM EDT
This answers my question about your Moeraki lighthouse; I can see that it must be near these, extraordinary, boulders. We visited here in 2006 and were amazed to see, what we thought looked like 'alien eggs', scattered all along the beach. They are an awesome sight, and I was very interested to read the history behind them...thanks. :)