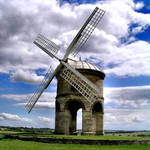 The Fulton building is a 13-story historic landmark, constructed by industrialist Henry Phipps in 1906, and has long since been praised for it's architecture, particularly it's arch and colorful stained glass dome. By the late 1990's the once glorious Fulton Building had fallen into a state of disrepair.

Star Realty - looking to complete the vision of Henry Phipps - to see this
magnificent structure transformed back to what it was originally designed to be…a hotel. Star Realty hand-selected Sage Hospitality, an investment hospitality group from Denver. Sage completed their $50 million renovation of the 107 Sixth Street property which opened their new "Fulton Renaissance Hotel" in March 2001.
The hotel has 300 rooms and is the tenth largest in the greater Pittsburgh area,
employing over 200 full-time staffers.

I cropped, used curves and a plug in...in Photoshop, to get the end result.

Guest - Oct 26, 2007 11:21 PM EDT
a very nice piece of work. Great composition. The plug in or filter that produced the strong etching like texture is really a plus artistically.

Guest - Aug 27, 2007 10:16 AM EDT
I especially like the correct architectural vertical perspective (parallel lines). Was this accomplished with the camera, or corrected in Photoshop? Nice work! Bruce

Guest - May 29, 2007 10:06 PM EDT
A pleasing result here, Mary. Thanks for the great history feed too. I like the filter you used tocomplete it - and again, the sweep of the bridge toadd interest. Vicki