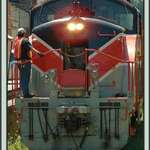 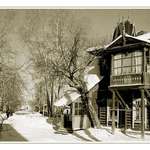 This image was the home of the late Sir John Mills, it is situated in the village of Denham, Buckinghamshire, one of a few remaining unspoilt villages.

Sir John Mills 1908 - 2005. Was one of the most significant of all British film stars, and in his nearly 60-year career appeared in well over a hundred films, as well as substantial theater and TV performances.
He was appointed a CBE in 1960 and was Knighted by Queen Elizabeth II in 1976.
He was laid to rest in St Mary's churchyard, aged 97.

Jas - Aug 11, 2008 09:42 AM EDT
What lovely architecture! I love the different shapes on the roof lines and the green creeper softens the harsh brickwork. I'd love to have a peak inside. Nice angle, shadows and colouring in your shot Chriss. :)